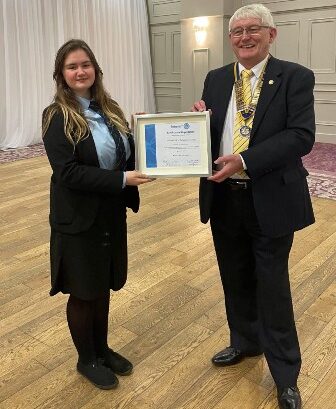 In September, Portadown College became one of only a small number of schools in Ireland to establish a “Rotary Interact” club. Interact is Rotary International’s way of attracting young people to and raising awareness of the work of Rotary. Rotary Interact was established in PC as part of our new “PC Connect” programme of activities for Sixth Form students on Wednesday afternoons.
Members of the club recently attended a meeting of The Rotary Club of Portadown where they were presented with the club’s official certification. President of Portadown College Interact, Megan, presented a cheque for over £250.00 to the Rotary Club of Portadown following a recent fundraising effort in College to support the “End Polio Now” campaign of which Rotary International are keen supporters.
Following a successful start, it is hoped that Rotary Interact will continue to grow in PC. Members are already planning a range of campaigns and fundraising events to highlight awareness of local and global issues.
Members of the club would like to pay special thanks to Kate Adams from The Rotary Club of Portadown for her invaluable help, encouragement and guidance throughout the year.