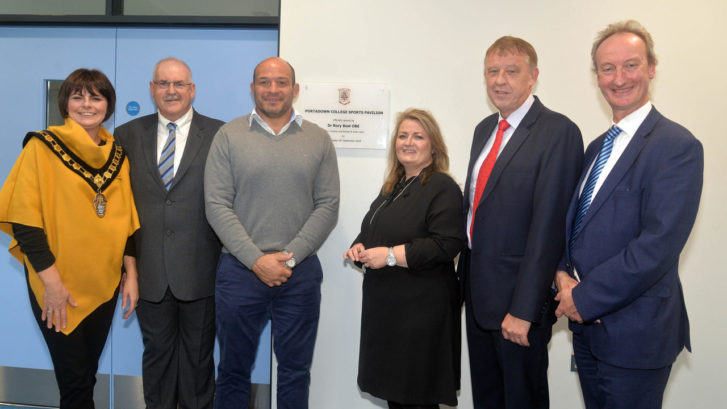 “Winners never quit, and quitters never win. We didn’t quit, and we are definitely the winners today.” Those were the words of Mr Peter Aiken, Chairman of the Portadown College Board of Governors, at the official opening of Portadown College’s new sports pavilion. Mr Aiken, Mr Harper (Principal of Portadown College), Members of the Education Authority, Local MLA’s, Lord Mayor Julie Flaherty and principals of local Junior High Schools were all in attendance as Dr Rory Best OBE (1999 Portadown Rugby Captain) officially opened the new sports pavilion on Wednesday 19th September 2018.

Mr Peter Aiken described the pavilion as a possible “Phase one of our new school build” and highlighted that its construction was essential as there will be a 9.6% increase of 0-15 year old pupils in the area. Mr Aiken also detailed that the introduction of the fitness suite will “improve the learning environment of the college” as well as fulfilling the goal of the College to improve the welfare of both students and staff.

Special guest Dr Rory Best OBE said it was “an honour to be back” while reminiscing on his time at Portadown College. He said that “it was here where it become a serious option” to play rugby and that he still remembers the Saturday morning matches during his Portadown College tenure. Dr Best also discussed how important the new fitness suite is as the game of rugby evolves calling it “an important update”. Dr Best hopes that this new pavilion will inspire more students to give sport a ‘try’ saying that in rugby especially, “No matter what size you are, there is always a position for you.”

It wasn’t just the international rugby star who commented on the new sports pavilion. Local MLA’s also highly commended the pavilion and its place in the local community. The Lord Mayor Julie Flaherty commented on the transformation from the old pavilion to the new pavilion “as different as night and day.” Doug Beattie (UUP representative for Upper Bann) said that he had “not seen a better gym in a school anywhere in the Upper Bann.”

So as Portadown College enters a new era with their new sports pavilion, the future looks bright for the College as it moves towards its centenary in 2024.

Students and staff of Portadown College were very excited for the grand opening of the Sports Pavilion with Mr Peter Akin, Chairman of the Board of Governors, quoting from Vince Lombardi “Winners never quit, quitters never win.” The Sports Pavilion houses high quality gym apparatus from exercise bikes to weights, treadmills to rowing machines and a range of muscle strengthening equipment.

Principal Mr Harper believes that the new pavilion will be a benefit to both students and staff, stressing the importance of physical fitness in helping to improve the learning environment of the pupils at the college. He went on to thank the Education Authority, J.H. Turkington & Sons Ltd, P.E. Staff, MLAs, Head Boy and Head Girl, Lord Mayor and the Principles of Junior High Schools.

Rory Best was Portadown College’s Rugby Captain in 1999 and rugby has been his life ever since. Rory seemed very relaxed and at home at Portadown College. In many ways Rory Best’s time at Portadown College has shaped who he is today. Rory recalls, “During my free periods I would have made my way down to the rugby pitch to throw a ball about………It was here that it (rugby) became a serious option.”

Rory Best was delighted to his old school develop in line with the evolving game of rugby in which work out facilities ae vital. Rory believes the Pavilion should encourage the students of Portadown College to perform to the best of their ability in sport reminding students: “No matter what size you are, there is always a position for you.”

Fellow past pupil, Lord Mayor of ABC Council, Julie Flaherty was delighted to see the enhanced facilities: “As a past pupil myself (1996) I remember the old Pavilion. The transformation is as different as light and day!”

Doug Beattie was also enthusiastic about the new facilities at Portadown College.

“Isn’t it fantastic? I have not seen a better gym in a school anywhere in the Upper Bann. The equipment is fantastic! I really hope the students and staff at Portadown College appreciate and use this amazing gym. Fitness in body, Fitness in mind.”