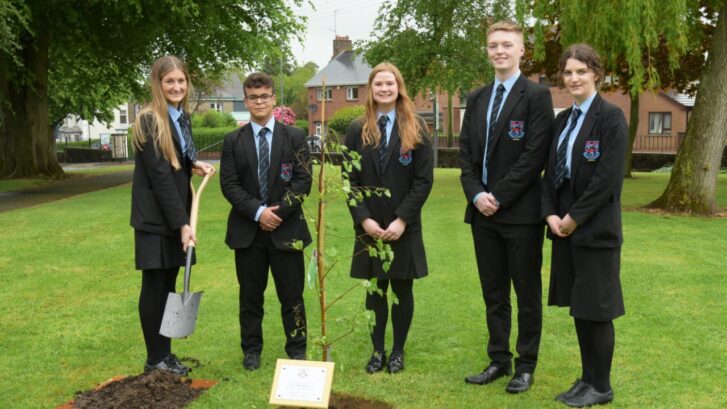 College Principal, Miss Gillian Gibb, welcomed those present after which the current Head Boy, Caleb Coert, paid a thoughtful and poignant tribute to Mr Harper. Caleb remarked: “It was Nelson Mandela who said, that ‘what counts in life is not the mere fact that we have lived; it is the difference we have made to the lives of others that will determine the significance of the life we lead.’

I am of the opinion that all school leaders, by their very nature, shape their individual schools based upon their personal values, their individual characters and the vision they have of the type of students they aspire for their school to produce.

Although I only had the honour of knowing Mr Harper for just a few weeks, former students speak of him with much fondness and respect. In the short time that I knew him, it was clear to me that Mr Harper was an individual who displayed immense integrity and had a love for the staff and students in his keeping. His contagious smile spoke of an individual who was both approachable and kind, a personal quality a young Year 11 student like myself truly appreciated.

Today, in a very simple way, we honour and pay tribute to a Principal who had an immense impact upon Portadown College. Many young people who attended the College when Mr Harper was Principal are better individuals today due to the impact he had on their lives. As Head Boy, it is my privilege to honour and pay tribute to someone who not only spoke about the College’s motto of Courage and Courtesy, but also lived it.

Portadown College is a better academic institution today because of the difference Mr Harper made to the lives of others during his time of leading this school. We honour him for the impact he had on staff, students, parents and the wider community alike. It is our individual duty therefore, to live the legacy that he left for each of us.”

Following Caleb’s tribute, the Head Girl, Sarah-Jane McKew, presented Ms Beattie with a bouquet before the Senior Prefect Team conducted the tree planting ceremony. Mr Peter Aiken, Chairman of the Board of Governors, concluded the event with a vote of thanks.

The tree, and accompanying plaque will serve as a permanent, visible reminder to all of Mr Harper’s legacy, as well as a reminder to lead our lives, as he did, with ‘courage and courtesy.’