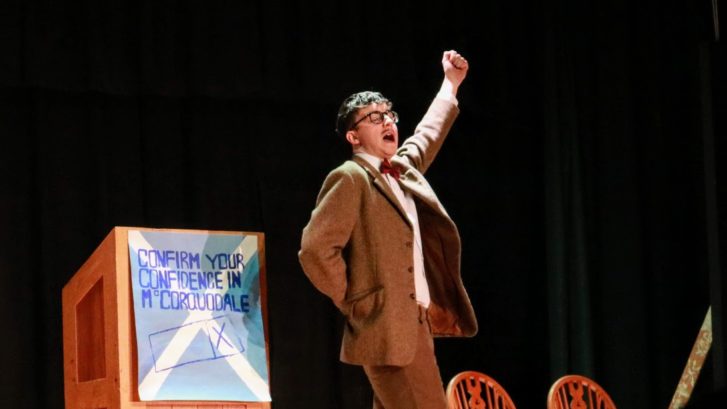 Portadown College Dramatic Society staged a very successful performances of The 39 Steps based on the ground-breaking spy novel by John Buchan.

The plot was simple: Richard Hannay (played by Jack Wilson) inadvertently found himself caught up in a spy ring and on finding himself accused of murder; he had to escape from London to Scotland where all his adventures really began.

Innovative physical dramatisation took the audience with Hannay on a bumpy train journey, running across the Scottish Moors during an air search ending in a plane crash, addressing an election husting, not to mention his discovery of the fated Professor Jordan, played in true James Bond villain style (complete with cat) by Amy Hanna.

Adding to the comedy was the element of romance provided first by Emma Brown as an ill-fated German spy, then by Lily McClatchey playing the role of Pamela Edwards, combining to produce a hilarious hotel scene.

The audience were compelled by the range of colourful characters, performed in authentic accents, (whether Scottish or Russian), but the Oscar belonged to Jack for his witty performance throughout, from droll one-liners to suggestive facial expressions.

Special mention must be made of the highly entertaining police and spy duos, with whom there was never a dull moment, whether it was as multiple characters on the train or in the playful aeroplane scene.