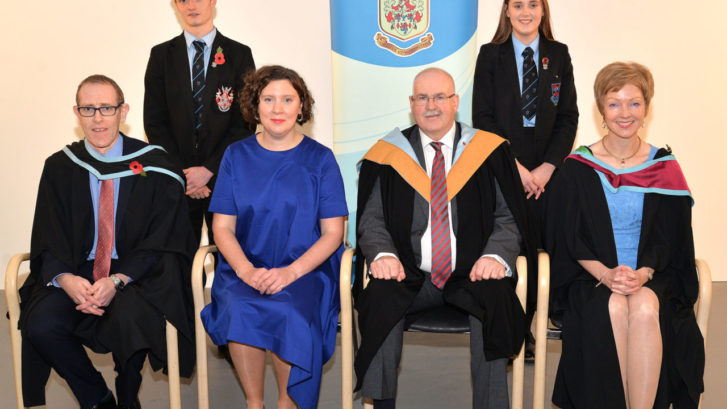 Shelley completed her GCSEs and A Levels at Portadown College between 1997 and 2001. She moved to London in September 2001 and completed a law degree at the London School of Economics and Political Science, graduating in 2004. She then completed her postgraduate studies and was called to the Bar of England and Wales in 2005.

She is currently employed as the Head of Regulatory Enforcement at the Royal Institution of Chartered Surveyors, managing a small team of lawyers and overseeing all regulatory cases which go to hearings, appeals and litigation in the higher courts.

Shelley’s speech began memorably with the opening lines of a poem from Portadown born poet Paul Muldoon “Why Brownlee left and where he went is a mystery even now”, setting the context for her life story from Portadown College to her role as a London barrister.  Having shared how teachers Mr Moore, Miss Gibb and Miss Curry had been inspirational, Shelley encouraged her young audience to “be an authentic version of yourself”, to have empathy and to hold on their accent!

Both the Chairman of the Board of Governors Mr Peter Aiken and the acting Principal Mr Peter Richardson paid sincere tribute to our former Principal Mr Harper.

Mr Richardson’s words summed up Mr Harper: “Mr Harper was a man who had one approach to education: student centred. Whether it be in school assemblies, engaging with students on a one to one basis or supporting the extra-curricular life of the College, he always sought to encourage, uplift and inspire. In all of his dealings with students, staff and parents he was generous with his time, and his ready smile and warm welcome always helped to set one at ease. Mr Harper not only led the College with distinction but played a lead role in promoting the Dickson Plan. When it came under threat, he was to the fore, not just to ensure its survival but then in subsequent work to plan for a sustainable future.”

Mr Harper’s enjoyment of Chemistry as a student, teacher, Head of Department and examiner for CCEA was marked by the Harper Memorial Award for the highest mark in A-Level Chemistry, presented by Mr Harper’s partner, Catherine Beattie. This was awarded to Matthew Vennard, currently studying medicine at Cambridge.

The Principal’s Prize for Outstanding Achievement was awarded to last year’s head girl Joanna Kerr, who amongst other notable achievements, addressed the House of Representatives Speaker Nancy Pelosi on her Good Friday visit to Stormont.