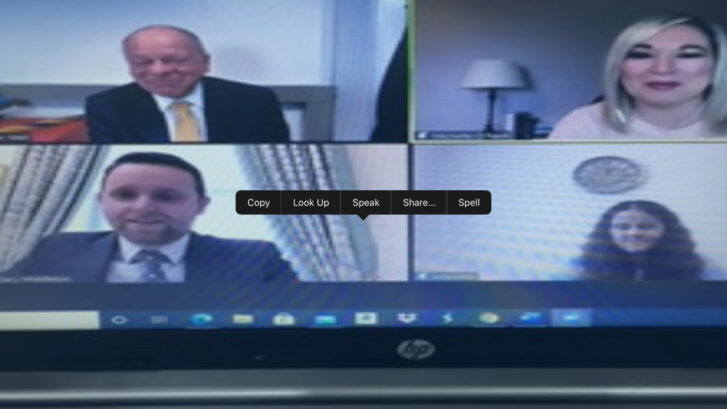 The Politics in Action group  of Portadown College has certainly not been idle while in lockdown.

On the 27th January  Politics in Action students  joined a number of schools and had a meeting with the Education Minister, Peter Weir.  The topic of conversation was  Mental health in Young People and how the government was going to address this.  Although £5 million has been set aside for Mental Health in young people the students were concerned that the government does not have a clear picture of what young people need.

The students were also very concerned with the grading of examinations in 2021.

PC’s very own Year 13 student Rebecca Stewart was able to ask the Minister a direct question:
Due to the pandemic no one can teach each other face to face but mental health issues are on the rise and can’t simply be solved by online meetings with others. Do you have any alternative ideas to this?

Later that evening, thanks to Sophie Barnett, Year 13, who not only is a member of the Politics in Action team but also a member of NI Youth in Government, the group attended a Q & A session with the Justice Minister Naomi Long. PC students were on top form with Ray Cardwell and Alanah Cahoon grilling the Minister about the government’s handling of the pandemic.

On the 3rd February  we had the honour of attending a virtual meeting with Deputy First Minister Michelle O’Neill and Junior Minister Gary Middleton; The First Minister was unavailable.  It was a great occasion to see the government listen to the voices of the future.  Let’s hope they take heed!!

This website uses cookies to improve your experience while you navigate through the website. Out of these, the cookies that are categorized as necessary are stored on your browser as they are essential for the working of basic functionalities of the website. We also use third-party cookies that help us analyze and understand how you use this website. These cookies will be stored in your browser only with your consent. You also have the option to opt-out of these cookies. But opting out of some of these cookies may affect your browsing experience.
Necessary Always Enabled
Necessary cookies are absolutely essential for the website to function properly. This category only includes cookies that ensures basic functionalities and security features of the website. These cookies do not store any personal information.
Non-necessary
Any cookies that may not be particularly necessary for the website to function and is used specifically to collect user personal data via analytics, ads, other embedded contents are termed as non-necessary cookies. It is mandatory to procure user consent prior to running these cookies on your website.
SAVE & ACCEPT
Post Results Service / Remarks 2022Click here for information