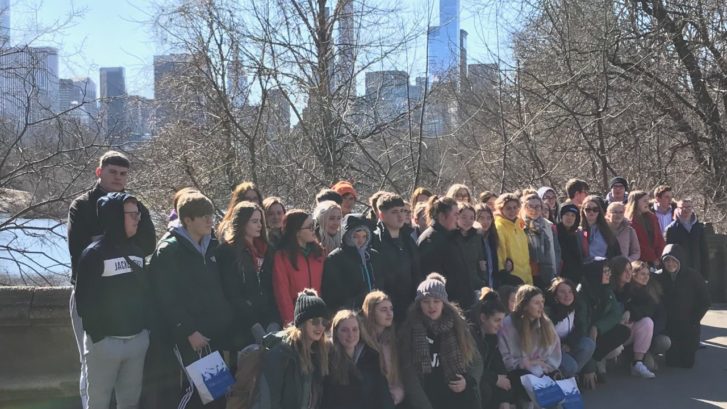 The trip began in Washington, where students had tours of the monuments and Arlington Cemetery before visiting the Capitol – the heart of American government. A stop off in Philadelphia set the American Declaration of Independence in context, as students witnessed the setting for the drafting of both the Declaration and the Constitution, before Washington had even been built. The journey ended with 4 days in New York, taking in historical sites including Ellis Island and the 911 Memorial, coupled with a wide experience of all New York has to offer from Broadway musical Wicked and NBC Studios to landmarks Times Square, Empire State Building, Statue of Liberty, Brooklyn Bridge and Central Park.

Some of the students reflected on their highlights:
“The pinnacle of the trip for me, was the visit to Capitol Hill. As a Politics and History student, seeing Congress in person was indescribable. The history that is entwined within the walls reflected the growth of politics and in turn, represents the political progression in America. In Politics we are taught the American political system and this trip provided the opportunity to see that system in action. Within Congress, we were permitted to sit in the House of Representatives and the Senate, witnessing politics in action and having a physical representation of the process that we are taught. The experience was truly unforgettable.”
Mackenzie Killops

“Having such an amazing opportunity to go to America on a school trip will be the highlight of my time at school! Being in America’s political capital, seeing the skyline of the Big Apple and learning about America’s history was astounding. The Washington Monument was my highlight. Standing at the colossal height of 167m, I was completely in awe. Seeing how the people of America honoured their first President, George Washington, with this beautiful monument, deepened my respect for the American Revolution and how much freedom means to people. It wasn’t just the sight of the monument:   we were able to touch the smooth stone that had stood the test of time. Many photos were taken to ensure I will never forget that night.”
Rebekah Robinson

“To stand on the site of the inauguration of Abraham Lincoln, JFK and many other American Presidents was an unforgettable feeling. Standing in the heart of democracy with access to both Congress and the Senate chambers was a once in a lifetime experience for me. From Washington to New York, the 9/11 memorial was sombre and silent. Seeing the many names etched along the edges of the memory pools was a sight I will never forget.”
Katie McConnell