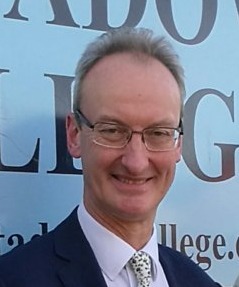 On Good Friday, 19 April 2019, the College Community lost not only our highly esteemed Principal with the untimely passing of Simon Harper, but a much valued colleague and dear friend too. From attending his very first College event, the 2009 Carol Service before officially assuming the reins of Portadown College on 1 April 2010, Simon lived out the College motto “Fortiter et Humaniter”, with “Courage and Courtesy”, in every aspect of his life.

Already a successful and experienced Headmaster on his arrival in Portadown, Simon was a highly charismatic educator and leader. He began his career in 1984 as a Chemistry Teacher in Wallace High School, moving to Regent House Grammar School where he later was appointed Head of Chemistry and then to the Principalship of Rathfriland High School. From his early career, Simon excelled not only as a vibrant and engaging classroom teacher, but also as the leader of the largest Duke of Edinburgh Award Scheme in the Province whilst at Regent House. Simon brought to Portadown College this lifelong passion for adventure and outdoor pursuits by assisting with Duke of Edinburgh expeditions and instilling a love of the outdoors in all of the young people who participated in these ventures.

A hallmark of Simon’s principalship was his heartfelt interest in students and staff as individuals. So as to ensure that each knew their value, he was always ready to offer a gentle word of encouragement and would urge them to, “Do something today that your future self will thank you for”.

Regardless of background, belief or personal circumstances, students, staff and parents were received with a warm smile and a sincere willingness to work towards a positive outcome. In all such situations, Simon gave of his time generously and graciously, always setting aside his own priorities to support others.

Simon was a strong educational leader with distinctive values which he brought to a range of challenging situations. As a College community, we are indebted to him for the dedication and industry he demonstrated in working alongside the Board of Governors to advocate for the Dickson Plan, consistently placing students at the heart of his educational vision. A man of strong personality and principles, Simon espoused high standards in all aspects of College life and never once shied away from any criticism this might have attracted.

Simon’s service to education in Northern Ireland extended beyond Portadown College and included holding office in the Craigavon Area Learning Community, Association of Controlled Grammar Schools and the Post-Primary Principals’ Association. His long standing career had also involved acting as Chief Examiner for A Level Chemistry with the CCEA.

A passionate traveller who enjoyed adventures in the most far-flung corners of the globe, Simon was ever keen to share his experiences with students and staff alike, encouraging each and every one to get out into the world, savour its magnificence and seize every opportunity. One of Simon’s most distinctive qualities was that he never lost a childlike sense of awe and wonder at the beauty of the world. He took particular delight in his garden at the foothills of the Mountains of Mourne and regularly enjoyed walking these hills with his much loved Irish Deerhound companions, Oisin and Uther.

Current and former students will remember with fondness his infectious sense of fun and wicked humour, from his cameo roles in College charity events to a starring role in “PC Happy”. In jovial banter with students, staff and governors, he also shared his love for sport, in particular his longstanding support for Ulster and Irish Rugby, alongside Coventry City and Crusaders football teams.

A man of eclectic taste, Simon derived considerable joy from art and music of all genres – classical, Irish folk and contemporary. Proud of his Banbridge roots and passionate about his Ulster culture, he demonstrated a reverent respect for tradition, as exemplified through his meticulous attention to detail and great pride in leading the College’s annual Act of Remembrance. Indeed, Simon often reflected poignantly on the sacrifice of others and had served proudly as an Officer in the Royal Naval Reserve for almost a quarter of a century.

Students and staff alike will hold dear the sentiment of Simon’s final Easter Assembly, inspired by his many visits to Coventry Cathedral, in which he spoke on the theme of Forgiveness and the message of Hope in the death and resurrection of Jesus; themes deeply important to Simon and ones which he sought to enact in his daily life.

As a College community, our loss is immeasurable. However, we will endeavour to uphold the College Motto “Fortiter et Humaniter” in Simon’s memory:

May the road rise up to meet you.
May the wind be always at your back.
May the sun shine warm upon your face;
the rains fall soft upon your fields
and until we meet again,
may God hold you in the palm of His hand.