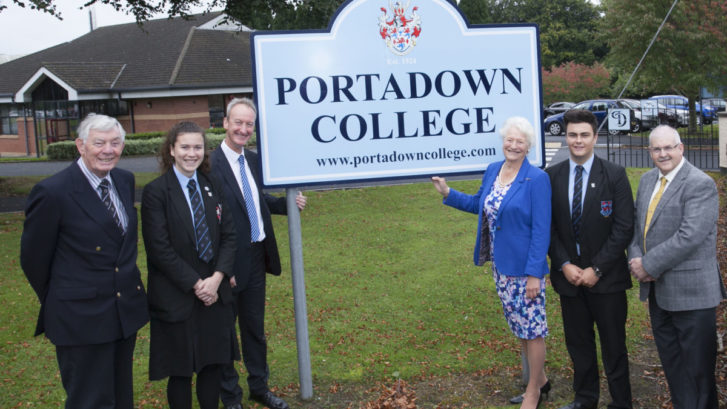 After 60 years, Dame Mary Peters returned to Portadown College where she presented a commemorative painting to the school to celebrate her 1972 Olympic Gold medal in Munich 1972.

The former Head Girl and Hockey Captain, Dame Mary Peters, addressed students saying, “It is a thrill, privilege and honour to be back at my old school.” Dame Mary told the students that when she started college she was a ‘very, very ordinary pupil, not academically bright’ but had loved everything the school had to offer, as Principal Mr Harper commented in his introduction, “Mary Peters embodies our College motto Fortiter et Humaniter, Courage and Courtesy”.

This very ordinary student was willing to try anything, including athletics, and when introduced to Coach Kenneth McClelland who was to become her inspiration, Mary discovered her true talent which would lead to an Olympic Gold medal amongst many other medals at Commonwealth Games.

Dame Mary Peters challenged PC students to be inspired:  “Don’t waste one day.  Follow your dreams. Take every opportunity….be somebody.”