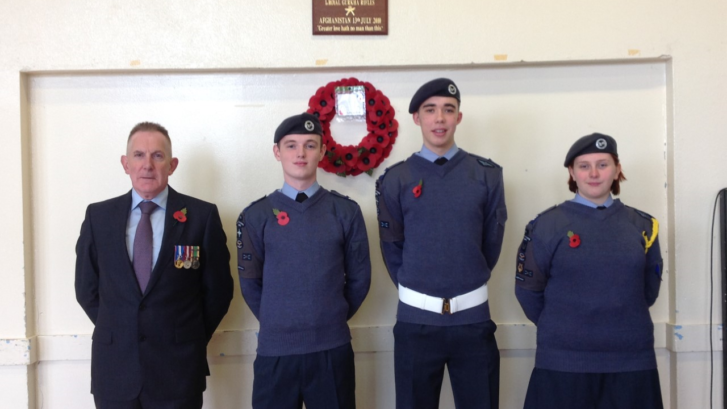 In the College Act of Remembrance this morning, we were reminded that 2019 marks the 75th anniversary of D-Day – 6 June 1944 when British, Canadian and American forces stormed the beaches of Normandy in the largest seaborne invasion in history.

D-Day was about liberation and the freedom which we have and enjoy today –freedom of movement, freedom of speech, freedom of religion to name but three. Mr Richardson implored students to never forget those who paid the ultimate sacrifice for their own and future generations, sharing the epitaph:

When you go home, tell them of us and say
For your tomorrow, we gave our today.

Dr Henderson (teacher in charge of ATC), Head Boy Ethan Williamson and Head Girl Victoria Calvert read poems which were followed by the Act of Remembrance.

Molly Somerville played the bagpipes as members of the College ATC laid the wreath, after which the Roll of Honour was read out by Mr Richardson and Mr Robinson read “They went with songs…”. Reuben Taylor sounded “The Last Post” before a minute’s silence, completed by The Rouse on cornet.