Samuel, having attained Associated Board Grade 8 in March played The Second Movement of Sibelius’ Violin Concerto.  His performance concluded with a standing ovation from the audience who were clearly overwhelmed.

The Young Musician of the Year event, held in Strathearn Grammar School on Saturday 1st April hosted a range of instrumentalists featuring violinists, a cellist, brass players of tenor and French horns as well as a pianist and a recorder player, all performing at a very high standard across the board.

Samuel is looking forward to performing with the Ulster Youth Orchestra this summer, with a view to studying Music Performance at one of the Royal Conservatoires of Music after completing his A Levels. 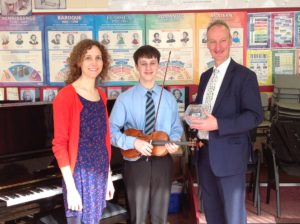