Mr Harper opened the proceedings with an address to the staff and pupils of Portadown College. Kiara McClelland (Head Girl) and Tim Neill (Head Boy) read poems following a short video clip showing men going over the top. Mr Robinson and Dr Henderson (teacher in charge of ATC) also contributed to the readings.

Following a poignant lament played on the bag pipes, the ATC laid a wreath. This was proceeded by a minute of silence and the Last Post.

The assembly was finished by prayers from the vice principals (Miss Gibb and Mr Richardson).

Every student left with the words of Flanders Fields engraved in their mind.

‘At the going down of the sun, and in the morning.

We will remember them.’ 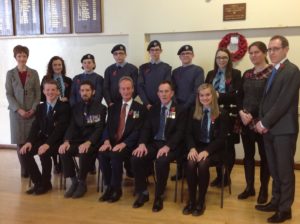