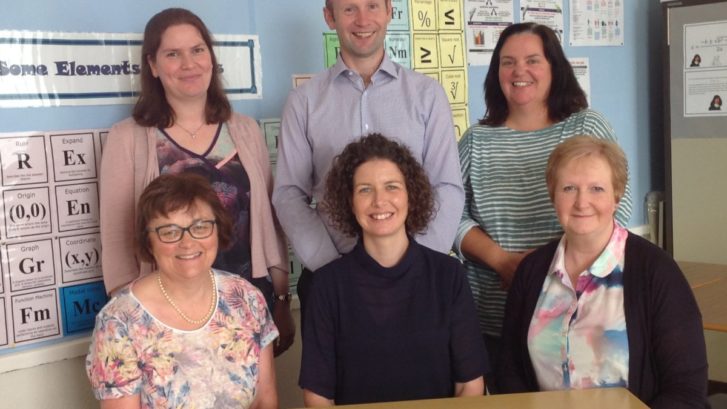 The Maths department is a dedicated, experienced and enthusiastic team of teachers who have a wealth of experience in examining at all levels of this subject.

Staff ensure a welcoming and effective learning environment, where students are expected to work hard and develop their skills in this subject.  In turn they can expect to be fully supported at each stage of their study.

Mathematics has been described as the art of calculation, a language and a science.  Mathematicians do not simply perform calculations or solve equations but seek to find the answers to unanswered questions.  Mathematics is also viewed as a way of thinking, with an emphasis on the ability to reason logically and use Mathematics as an effective means of communication.

Students will have the opportunity to further develop their knowledge; model and solve real life problems; begin to appreciate the relationships between different areas of Mathematics and realise the relevance to other subjects and areas of work.

We aim to ensure each student:

What is GCSE Mathematics about?

This is a core subject which enables students to use mathematics as a tool for learning across the curriculum. Students will develop the knowledge and skills necessary for the application of concepts in a practical context. They will use their skills of logic and reason to  solve problems.

What will I study?

Each unit contains elements of Number and Algebra, Geometry and Measures and Handling Data.

This subject is a necessary numeracy qualification for all students.

A grade C or above will be an essential requirement for entry to further courses of study and future employment. A number of A Level courses will require a grade B and if a student obtains a grade A from modules M4 and M8, they may proceed to study A Level Mathematics.

There is no controlled assessment for GCSE Mathematics.

Full details of the specification can be found at http://ccea.org.uk/qualifications/revision/gcse/specifications_support/mathematics

What is Further Mathematics about?

This is a subject developed for high-attaining students who wish to broaden their mathematical experience.  The course provides the essential foundation for study of A Level Mathematics and is also a very useful subject for those students wishing to study A Level Physics.

What will I study?

Further Mathematics allows students to access the knowledge and develop the skills for the study of subjects such as sciences, geography, business, economics and technology. This will lead many of them to careers in science, engineering, finance and accounting.

Full details of the specification can be found at http://ccea.org.uk/qualifications/revision/gcse/specifications_support/further_mathematics

AS Mathematics follows on from the work covered in GCSE Further Mathematics – many topics will be familiar, but are now considered in greater detail.

A similar format is completed at A2 with students taking:

Full details of the specification can be found at http://www.ccea.org.uk/mathematics/

This allows students to take a second Mathematics A level. The course is an extension of the material covered in AS and A2 Mathematics and is particularly suited to able mathematicians who wish to become highly proficient in this subject. Further Mathematics provides an excellent background for further study in Mathematics, Physics and Engineering. It is also designated as a “desirable” subject for some highly competitive university courses in Economics.

Entry Requirements: Minimum A grades in GCSE Mathematics (from M4 and M8) and GCSE Further Mathematics.

Students complete their AS in Year 13 by taking the following modules:

A similar format is completed at A2 with students taking:

Full details of the specification can be found at http://www.ccea.org.uk/mathematics/

Mathletes is PC’s Maths club and meets during lunchtime every Wednesday for any student in Years 11 and 12.

It gives keen puzzle-solvers, logical thinkers and mathematicians the opportunity to discuss and work their way through a wide variety of tasks with like-minded individuals and with the assistance of our Year 14 mentors. New friends and new skills are made in equal measure during our Wednesday meetings which have proven to be a welcome addition to the extra-curricular provision at Portadown College.

Congratulations to all the certificate winners in the UKMT Intermediate Maths Challenge 2019.

There were 24 certificates awarded in total: 14 Bronze, 7 Silver and 3 Gold.  Our gold certificate winners were Francesca Kim (Year 11), Katie McCallen (Year 12) and Kevin Guo (Year 12) who was also awarded ‘Best in School’.  Katie and Kevin also qualified for the next stage – the Pink Kangaroo Challenge which they sat in April.  We look forward to receiving notification of their results in the near future.

Well done to all involved!

The College is delighted to be honoured by inaugural awards in memory of two of Northern Ireland’s most famous and forward thinking scientists, Sir Hans Sloane and Sir Allen McClay.

The Hans Sloane (Memorial Fund) Trust, in partnership with National Museums NI, was established in 1960 to commemorate the life and work of the celebrated physician, scientist and collector. This year, in partnership with Almac Group, The Hans Sloane Memorial Fund established a new award, the Sloan McClay Award, to celebrate the visionary entrepreneur and businessman, Sir Allen McClay. The award recognises excellence in GCSE level in science and mathematics by Northern Ireland’s brightest GCSE students and their teachers.

At a prestigious ceremony in the Ulster Museum, the Sloane McClay Award for first prize was presented to Matthew Vennard who achieved the highest combined marks in Biology, Chemistry, Physics and Mathematics at GCSE level in Northern Ireland in 2017. Principal, Mr Simon Harper, also received a Sloane McClay Award in recognition of excellence in teaching at Portadown College. Both awards were presented by Professor Tim Harrison, Vice President, Drug Discovery, Almac Group.

The College is exceptionally proud of both awards which recognise Matthew’s remarkable individual success, as well as the collective achievement of his teachers.

Competitions
Students are encouraged to participate in Mathematical activities outside of the examination curriculum. They can enter a range of individual or team competitions which are organised on a local and national basis.

Over 250 000 students from more than 3000 schools from across the UK took part in the Intermediate Mathematical Challenge in February.  The top 7% were awarded Gold certificates, the next 13% Silver and another 20% Bronze.

Gold certificates were awarded to:
Matthew Vennard & Davan McCann who were also selected to compete in the follow-on round.

A group of 77 Year 13 and 14 students entered this year’s UKMT Senior Maths Challenge. Approximately 80,000 students from across the UK take part each year, with the top 10% receiving a Gold certificate, the next 20% Silver and the next 30% bronze.

The Silver Certificate winners are:

A further 26 students were awarded Bronze certificates – these will be given out in class. Well done to all who took part.

Manus Wong, James Carrick, Robert Cornett and Sam Mullen took part in the QUB Maths Challenge and although they were not placed in the top 3, a challenging day was enjoyed by all.

Faith Jenkinson and Katie Neill were the first PC students to complete the Maths Olympiad for Girls and are awarded Certificates of Participation. Well done for completing a very challenging task!

All three of the Gold winners qualified for the follow-on round, with Ivan Ribeiro subsequently being awarded a Merit Certificate.

Senior Mathematics Challenge – November 2014
This competition is organised by the UK Mathematics Trust. A group of 42 students from Years 13 and 14 entered this year’s UKMT Senior Maths Challenge. Over 81,000 students from across the UK took part, with the top 10% receiving a Gold certificate, the next 20% Silver and the next 30% bronze.

Full details can be found at http://www.ukmt.org.uk/

QUB Team Challenge – December 2014
This competition is organised by the School of Mathematics and Physics at Queen’s University Belfast.  Each year a team of two Year 12 and two Year 13 students participate. This year Holly Millar, Jordan Montgomery, Charlotte McClelland and Jacob Bleakley were entered and enjoyed a challenging day in the Great Hall at QUB. They were suitably rewarded by achieving 2nd place.

In February 2014, Yishen Wang, Thomas Trouton, Andrew Carrick and Josh Ruddell travelled to London to compete in the national finals of the UKMT Senior Team Challenge.

A level Mathematics provides the basis for study of the following courses at degree level:

Further Mathematics provides a distinct advantage in first year university study of Mathematics, Physics and Engineering courses and is advisable if applying for these subjects to Oxbridge, Warwick, Durham etc.

Some useful websites to consider are: