What is GCSE History about?

GCSE History covers a number of topics from Germany between the wars and the rise of the Nazis to Northern Ireland from the 1960s to 1985, focusing on the development of the troubles.  A range of skills are developed including the ability to communicate in both oral and written form, to work with others, to listen to and accept differing views, to extract information from a range of source materials and to reason and present organised and supported arguments.

History is a valued subject among many further education institutions and with employers who value the skills developed by the course. There are some jobs which relate directly to History but graduates of the subject are employed in many differing careers, such as law, accountancy, media, sport and business.

What is A Level History about?

Our study focuses on the sixteenth century and develops a range of skills which are applicable today. Students must gather information and report both orally and in written form, work with others, use a range of methods of communication, develop critical thinking skills and develop historical interpretation.

Students will use a number of skills in this subject and these include gathering information, expressing opinions in both oral and written forms and understanding and interpreting source materials.

A range of communication skills alongside critical thinking skills open doors to a wide range of careers.  Some of the main career pathways for students of History include law; management and consultancy; publishing and public relations; marketing and advertising; business and finance; accountancy; investigative journalism; politics and political research; media, broadcasting and communications and, of course, teaching and lecturing!  Interestingly in 2012-13 only 13% of History graduates in the UK entered teaching and 2.3% entered post-graduate study for the medical profession.

History requires a grade B at GCSE.

What is A Level Government and Politics about?

AS and A2 Government and Politics develop essential knowledge and understanding of politics. This course concentrates on developing skills rather than knowledge. Students look at motivation behind actions and develop ways to argue their case. Much of the work will be carried out through group discussion which can be reported orally or in written form.

The analytical and investigative skills developed in this course can contribute to a wide range of careers.  Some of the main career pathways for students of Politics include law, management and consultancy, publishing and public relations, marketing and advertising, business and finance, accountancy, investigative journalism, politics and political research, media, broadcasting and communications and, of course, teaching and lecturing.

Viggo Stanczak, Trinity Cully, Jake Givan and Hollie Taggart represented Portadown College in a Lessons from Auschwitz Project organised by The Holocaust Educational Trust whose aim is to educate young people from every background about the Holocaust and the important lessons to be learned for today.

Based on the premise that ‘hearing is not like seeing’, the students took part in a four-part course exploring the universal lessons of the Holocaust and its relevance for today. This involved a site visit to Auschwitz as well as an interview with a Holocaust survivor.  These four students were selected from 10 students who applied for this opportunity, writing a 250-word essay on why they should be a part of this project.

As we anticipated, Auschwitz-Birkenau was a horrifying and profound experience. These concentration camps capture another era of remembrance, one that must not be forgotten.

I found the entire Auschwitz experience very uncomfortable. Walking into Auschwitz, entering through the gates, I felt a chill breeze going down my spine. I saw the destruction of the cell blocks in Birkenau, and just the sheer size of the place was unbelievable. I saw the piles of shoes and among the pile of rotten shoes there was a little red shoe shining through. This shoe shone like a beacon of hope for a little Jewish girl, promised a ‘better life’ in Auschwitz, only for her to be brutally murdered, cut down, starved by the monsters that were Nazis. These events happened and they happened to millions. I also saw the ash carts where Nazi soldiers would dump the Jewish people’s ashes into a lake.

I could only respond with questions: how did this happen? How were 1.1 million Jews murdered in Auschwitz? Where was everyone else?

I left Auschwitz with more questions than answers. When something so tragic, so profound, so enormous happens, the world must talk. We must remember. We must learn. Why is there still persecution happening in the world, still?! My challenge for you is if we don’t continue talking and reflecting, the world is bound to repeat itself.

Viggo Stanczak’s reflections on his visit to Auschwitz–Birkenau

Auschwitz-Birkenau, alongside the talk from the holocaust survivor Mrs Genine Wedder, did something that no amount of reading, research or lessons could do. It showed the scale of the Holocaust, but not in the sense of statistics: 6 million, 21 million, such and such square kilometres…which are so readily thrown around like sand. It showed me the scale of the Holocaust on the individual. The people, the families that lived their day to day life the same as any other person, who came from different economic backgrounds, had different beliefs and different personalities.

In the Spotlight for PC’s Broadcasters and Politicians

Five students were invited to join the audience for BBC Spotlight on 24th October.

Matthew Wilson enjoyed his role as a panellist at the top table for the warm up with Mandy McCauley, articulating the politician’s viewpoint with vigour.  Nye Crozier put a question to the DUP’s Edwin Poots, while Penny McCullough was chosen to present her question on abortion to the panel.

Kathryn Reilly and Rachel Turner also enjoyed the audience experience as well as the anticipation following the submission of questions in the Green Room.

Meeting host Noel Thompson at the end and actually sitting with him at the top table was the highlight of the evening for students and teachers alike.

Stormont is open for business again as Year 11 History students from Portadown College debate the right to vote at 16.

As Historians and students of Politics we are surrounded by lots of living examples of History and as a school we try to enable our students to experience some of these.  We carry many visits such as:

Former student and advisor to MP James Brokenshire, Secretary of State for Housing, Communities and Local Government, returned to the College to share his experiences and Political journey with A Level Politics students.

Mark shared his transferable skills from Politics into Journalism, giving the students a few tips about pursuing a career in Journalism: “If you don’t write about it, someone else will.” Mark reinforced the building of a portfolio as essential regardless of how ‘important’ the stories are.

We also attempt to carry out a major visit yearly.  Past trips include: 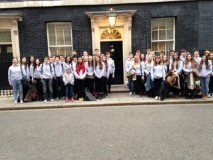 Although the study of History is not job specific, its students have the skills that enable them to pursue a multiplicity of careers demanding a wide range of talents, and they do so extremely successfully in an open and competitive jobs market.”

The study of History provides students with a wide range of transferable skills, which are important in many career fields. Understanding and analysis of issues and events are of key importance to historians and can be applied in many other fields of work. Other skill areas developed in studying history include:

We attempt to show our students the jobs that can be linked to History by considering some high profile cases but more importantly with examples of the careers our own past pupils have moved into.

Year 13 History and Politics students were inspired today by the Careers of past pupils Kerry Crawford, John Davidson and Molly Liggett:

Kerry has opened her own café – Apple Patch in Scotch Street; Molly works part-time for the DUP; John works for NI Fire Service.