Miss P Curry (Head of Department): GCSE and A Level 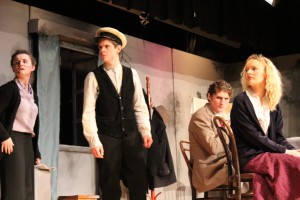 Students are encouraged to develop their interest in, and enjoyment of, drama and theatre, both through experience as audience members and through their development of dramatic and theatrical skills.  Candidates do practical work which is focused on a final presentation to an external examiner, plus theoretical work on set texts and prescribed theatre practitioners.

AS and A2 Drama and Theatre Studies develop essential knowledge and understanding of drama texts and theatre in performance, encouraging candidates’ ability to respond critically and sensitively to a range of texts.  Students should emerge as confident and independent interpreters of drama and theatre.  They should assimilate theatrical concepts through practical and analytical exploration of dramatic styles and theatrical methods.  The subject also develops key skills such as commitment to a group project, time management, self-discipline, working with others, problem solving and communication. 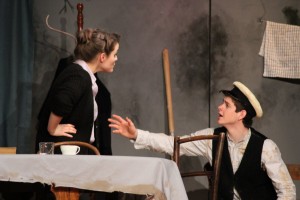 What is GCSE Drama about?

You don’t have to have any previous experience of Drama in order to study it at GCSE Level.  It will develop your confidence in working with others and in public speaking which will have a positive impact on your other subjects when you have to do group work or give presentations.

The key skills which you will develop through GCSE Drama include creativity, working with others, problem-solving, communication, negotiation, self-discipline, time-management, setting deadlines and meeting targets.  Drama students should learn to understand the practical components of the theatre and develop the ability to understand and respond to a wide range of dramatic productions.  The study of Drama at GCSE Level should also help to develop a lifelong interest in the theatre as there are many opportunities to visit the theatre both locally and further afield. 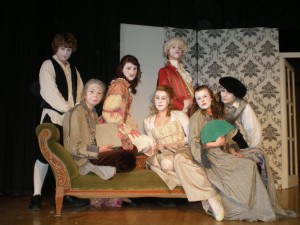 What topics will I study and how will I be assessed?

The options available for practical work are:

Scripted performance (compulsory element and available in March of Year 12)

Students also choose their best work from one of the following:

The written examination involves questions on a set text  (Juno and the Paycock by Sean O’Casey) and a different play which pupils will have performed in the scripted performance unit in March of Year 12. 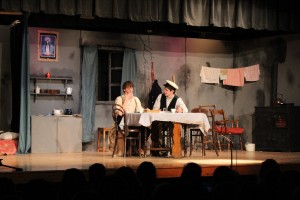 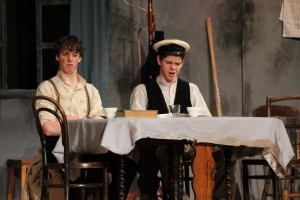 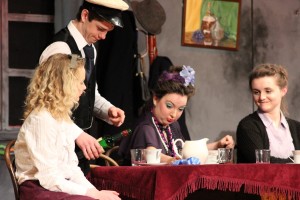 Students can study Drama and Theatre Studies at A Level.  A joint degree in English and Drama is a regular choice for students at university.  The skills and confidence acquired during the course are transferable skills and students have gone on to have a wide range of careers which have some link back to the course.  These include law, public relations, teaching, arts administration, publishing and technical support in the theatre.

A GCSE in Drama can indicate to prospective employers that you are confident, articulate, have excellent communication skills and are capable of working well in group situations.

To study Drama pupils need to be very motivated, disciplined and be able to work with commitment in a group / team setting. They need to show enthusiasm, imagination and initiative in both the written and practical aspects of the course.

Trips to the Theatre

Students are encouraged to visit the theatre on a regular basis; trips are organised to theatres in Armagh, Belfast and Dublin.  Students have also been encouraged to support the National Theatre’s NT Live project which streams live plays from London’s National Theatre into local cinemas.  Students recently saw the award-winning Frankenstein and the Young Vic’s A Streetcar Named Desire.

In addition to this, pupils also have free access to Digital Theatre Plus – a subscription service which streams major London productions to be viewed online.

More information on Digital Theatre Plus is available here.

Drama students are encouraged to take part in the College play – either on stage or behind the scenes.

Further information about GCSE Drama with CCEA is available here.

A Level Drama and Theatre is a linear qualification which is designed to be taken over two years.  In order to achieve the award, students must complete all assessments at the end of the course and in the same series.

What is A Level Drama and Theatre about?

The A Level in Drama and Theatre involves analysis and understanding of plays, creating original drama and practical exploration and interpretation of extracts.

The key skills which you will develop through A Level Drama include creativity, working with others, problem-solving, communication, negotiation, self-discipline, time-management, setting deadlines and meeting targets.  You will also develop confidence and your ability to be constructively critical.

A joint degree in English and Drama is a regular choice for students at university.  The skills and confidence acquired during the course are transferable skills and students have gone on to have a wide range of careers which have some link back to the course.  These include law, public relations, teaching, arts administration, publishing and technical support in the theatre.

Students have access to Digital Theatre Live, a subscription service which allows them to watch London productions online.

A Spoonful of Disappointment

For Portadown College drama students, expectations of a supercalifragilisticexpialidocious night at the theatre were blown away as the cast of Mary Poppins failed to return from London for the scheduled performance in Dublin’s Bord Gais Energy Theatre.

Here follows the apology that awaited customers as they arrived for the show, not having been informed before arrival:

MARY POPPINS UPDATE:  We regret to inform you that tonight’s scheduled performance of Disney and Cameron Mackintosh’s MARY POPPINS is cancelled.

Due to unforeseen circumstances, the show, which was due to commence at 7.30pm tonight Tuesday 15th December, can no longer go ahead.

We would like to sincerely apologise for any inconvenience this may cause.  All patrons will be entitled to a full refund from their point of purchase.  Alternatively you can rebook for MARY POPPINS for another date over the run via our dedicated booking line on 0818719377.  While availability is limited across the run we will do our utmost to secure you the best possible alternative seats.  For more information please see

Once again we would like to apologies for any disappointment this may cause anyone due to attend tonight’s performance.  Please note all further performances for MARY POPPINS will go ahead as scheduled.

Not only were students and staff hugely disappointed, but for the AS Drama students, this theatre visit was to form part of their AS Drama & Theatre Studies assessment, having researched the show in advance.

While we could appreciate that the fault lay with Disney and Cameron Mackinstosh, the theatre did little by way of conciliation, with no offer of refreshment following our two and a half hour bus journey, refusing to negotiate compensation for our travel expenses.

Lord of the Flies

On Thursday 26th September, Year 12 went on a trip to the Grand Opera House in Belfast to see a live production of the classic novel, Lord of the Flies. I thought it was one of the best shows I have ever seen, even before it began!

As soon as I walked into the hall, the set immediately grabbed my attention. The huge life-like plane was incredible and also, the amount of the detail put into the “forest” was truly impressive.

The production was so unique in many ways, such as the modernisation of the context of the play incorporating today’s technology and social media into the script. It wasn’t like we were expecting it to be at all and I think that is partly why we all were in complete awe.

The sheer talent of all the cast was very well portrayed, especially during the second act where most characters had to be very dramatic. Their costumes and makeup were so meticulous and realistic, unsurprisingly.

As a drama student myself, I think it was really exciting and inspiring and it’s actually hard to put into words what the highlight even was.   I highly recommend  it as a production that everyone should go to see. I would even go a second time!

The creativity, communication skills and confidence acquired during the course are transferable skills.

Students often go on to study Drama at University and English with Drama is a frequent combination of subjects.  One student who had never acted furthered his studies by concentrating on the theoretical side of the subject and continued with a Masters degree.  In the past, Drama students have gone on to a wide range of careers which have some links back to skills developed on the course.  These include public relations, law, journalism, arts administration at the RSC, PR, events management, business, marketing, teaching and technical support in the theatre.